The Day of the Shout 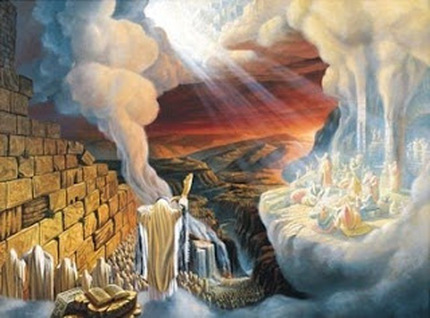 What is the Feast of Trumpets?

On our calendars it's known more familiarly as Rosh Hashanah. However, in reality we're talking about two completely different feasts.

Rosh Hashanah actually means "Head of the Year"; in other words, it's the Jewish New Year. The Jews believe that it is the beginning of their civil year, but it has very little to do with Yah's Feast of Trumpets as read in Leviticus 23.


In fact, many  aspects of the new year celebration in the Jewish culture come directly from the Babylonian calendar system which many of them began to adopt after their captivity there, some 2,500 years ago.

The Day of the Shout.

"Then Yahweh spoke to Moses, saying,
Speak to the children of Israel, saying: 'In the seventh month, on the first day of the month,
you shall have a sabbath-rest, a memorial of blowing of trumpets, a kodesh convocation.
You shall do no customary work on it; and you shall offer an offering made by fire to Yahweh.'"
- Leviticus 23:23-25


The Seventh Month: While we're looking at the end of September, which is the ninth month, how can we say that the feast is in the seventh month?
Yahweh told Moses and Aaron before He led them out of Egypt that the beginning of their months, was actually in the spring around the time of our months March/April. So starting from there we end up with the seventh month falling around this time of year.  Elohim's calendar is the true time keeper, not the Gregorian calendar we use today.

A Kodesh (Set Apart) Convocation: What does the word convocation mean? The Hebrew word for convocation is "miqra" (mik-raw) which means a public meeting; also a rehearsal.
The idea is that the feasts of Yahweh are set kodesh meetings between Him and us, as well as rehearsals.
"Rehearsals for what?", you may ask.   Rehearsals for the time coming when we are with Him for all eternity.

The word for feast is "moed" which means appointment, or a fixed time. The Feasts of Yahweh are appointed times that He has specifically set aside to meet with us throughout the year. They are important for that reason alone, but He also works in many ways during the feasts, in the lives of His people.

In verse 24, Yahweh says that the feast of trumpets should be a memorial of blowing of trumpets.

Memorial = zikron - a memorable thing; a record
Blowing of Trumpets = teruah - clamor, that is, acclamation of joy or a battle cry.

It is a memorial of an acclamation of joy!

In Nehemiah 8:1-12, Ezra read from the Torah to all the people assembled on the Feast of Trumpets. As he read, the people were convicted upon hearing the Commandments and began to weep, however, the Levites who taught the people said,

"This day is set apart to Yahweh your Elohim: do not mourn nor weep...do not sorrow, for the joy of Yahweh is your strength."


So how can we say that the Feast of Trumpets, which Yahweh gave to the Israelites, is for us as believers in Messiah?

And what about the 'offering made by fire to Yahweh'? How does that work today under the New Covenant?

Quite simply, the feast itself speaks of not only hearing the voice of the Master, but responding to Him with our lives
as we await His return.

"I beseech you therefore, brethren, by the mercies of Yahweh, that you present your bodies a living sacrifice,
set apart, acceptable to Elohim, which is your reasonable service."
- Romans 12:1

If we offer up not only our praises, but our very lives in obedient service as a sacrifice to Elohim, then He will accept that offering if we are found in His Son.
Because Yahweh is a consuming fire (Hebrews 12:29), our lives then become a "burnt offering" in a sense.

This is not spiritualizing the matter as we think of it, since the idea of literal, animal sacrifices were simply a shadow, or picture, of the sacrifices which we are to now offer up.

"for we will offer the sacrifices of our lips."

The word for sacrifices in the Hebrew is "par" which means literally - bull calves.

The Feast of Trumpets speaks clearly of Yahshua's return for His saints. Whether or not we respond to His calling by repenting of our sins is the decision we must make.
Because of this, it is beautiful to see that The Feast of Trumpets is literally Yom Teruah, or the Day of the Awakening Blast!

The Trumpet (Hebrew - shofar) was often used as an alarm, a call to battle, or an awakening blast for the people to respond to. This is why the shofar (trumpet) can be best identified with the voice of Elohim. It represents His voice because the Master often uses the trumpet as a picture of calling His people to Him.

Exodus 19:16 tells us of the shofar which sounded from Mount Sinai. It grew louder and louder
and the mountain shook (as did the people!).
Moses spoke and Elohim answered Him by voice. Moses responded to the blast of the shofar and YHVH then answered him.
This should be our response as well. The shofar sounded louder and louder, just as the Master does with us to get our attention.
Our prayer should be that we would hear His voice and respond to Him before He has to cry out to wake us up!

Like Elijah, we too should listen to the 'still, small voice' of Yahweh. The one that is gentle and peaceful.
Otherwise we will not fully understand what He is saying to us when it comes to the point that He's shouting to get our attention.

The Day of Yahweh (the Day when our Savior returns) is a Day which Joel describes as terrible, and a Day of darkness and gloominess (Joel 2:1-2), and all accompanied by the sound of the trumpet (shofar). This is 'terrible' to those who do not know the voice of Yahweh - those who do not have a saving relationship with Him and reject His commandments (Matthew 7:21-23).  Keeping His commandments, by the way, is what He uses to give us better understanding and wisdom concerning Himself (Psalm 111:10) and proves our faith in Him and love for Him is real (John 14:15; James 2:14-26).

To those who love and obey Him, the Day of Yahweh is a great day of salvation for all His people that await Him!

"And He will send His angels with a great sound of a trumpet, and they will gather together
His elect from the four winds, from one end of heaven to the other."
- Matthew 24:31

Notice the 'great sound of a trumpet' that accompanies our Master's return.

"For the Master Himself will descend from heaven with a shout,
with the voice of an archangel, and with the trumpet of Elohim.
And the dead in Messiah will rise first."
- 1 Thessalonians 4:16

Notice also the words like 'shout' and 'voice' which are alongside the phrase 'trumpet of Elohim'.
There is a definite link between the shofar and the voice of our Savior.

"I was in the Spirit on the Master's Day, and I heard behind me a loud voice, as of a trumpet, saying,
'I am the Alpha and Omega, the First and the Last'
- Revelation 1:10-11a

We see from the context of this chapter that the 'voice' which John heard was the Master Yahshua's, and it sounded like a trumpet.

Clearly, the shofar that sounded from Mount Sinai, as Elohim spoke to the children of Israel, was also a prelude to the coming of our Messiah when the heavenly shofar will sound again and He will gather His chosen ones to Himself!


Do you hear His voice?  Can you tell where the great Shepherd is directing you?
If not, then you must seek Him to determine whether you truly know the Shepherd.
If you don't, then when the shofar sounds from heaven and our Messiah returns for those who love Him, He will say to you,