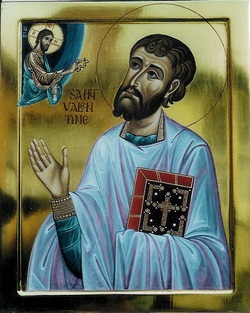 Good ol Saint Nick!  Oh, wait, I mean Saint Val!  Valentine, the "holy" catholic priest who was supposedly imprisoned for performing weddings for soldiers who were forbidden to marry, and for ministering to persecuted christians under Roman rule.
There were numerous martyrs named Valentine, but two of them seem to be the focus of the Valentine's Day legend.  Valentine of Rome and Valentine of Terni.   Both men were supposedly martyred and buried in Via Flaminia, an ancient road in Rome. (1)

It was most likely Geoffry Chaucer, in 1382, who first brought to popularity the legend of "Saint Valentine's Day" in his work "Parlement of Foules". (2)
The poem was written in honor the first anniversary of the engagement of King Richard II of England to Anne of Bohemia. (3)  Both were only 15 years old at the time of their marriage just 8 months later.

While it would seem that such roman-tic ideas of love and sacrifice seem to come from such a saintly fellow such as one of the Valentines, the date of February 14th and the lustful attitude that usually accompanies this holiday probably stems from the Roman fertility festival of Lupercalia.

According to Plutarch:
Lupercalia, of which many write that it was anciently celebrated by shepherds, and has also some connection with the Arcadian Lycaea. At this time many of the noble youths and of the magistrates run up and down through the city naked, for sport and laughter striking those they meet with shaggy thongs. And many women of rank also purposely get in their way, and like children at school present their hands to be struck, believing that the pregnant will thus be helped in delivery, and the barren to pregnancy. (4)

The rites of the festival were headed by the priests of Faunus, the god of pastures and fields. (5)  These priests were known as the Luperci as they honored Lupa, the she-wolf who suckled Romulus and Remus, the founders of Rome. (6)  Sounds believable.
The festival of Lupercalia began with the Luperci sacrificing two male goats and a dog. (7)  The feast lasted from the 13th to the 15th and entailed the following: the Luperci cut thongs from the skins of the victims, which were called februa, dressed themselves in the skins of the sacrificed goats, in imitation of Lupercus, and ran round the walls of the old Palatine city, the line of which was marked with stones, with the thongs in their hands in two bands, striking the people who crowded near. Girls and young women would line up on their route to receive lashes from these whips. (8) (9)  Awww...sounds so romantic! 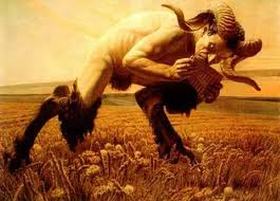 One of the many false gods among the Romans, Faunus was related to the Greek's version Pan.  This god was called the 'protector of the cattle'. (10)

It's no wonder the feast of Valentine's Day stems from the worship of this demon.  In the 18th and 19th centuries, Faunus/Pan became associated with the Romantic movement of western Europe.
Pan was famous for his sexual powers and was often depicted with a phallus.

This is also where we get our word 'panic' from.  It was said that Pan inspired panic in lonely places when he would be disturbed from his afternoon naps. (11)

So is Valentine's Day really just about sappy love and chocolates?  Is that how Yahweh sees it?  Or does he see the pagan rites of fertility dedicated to a false god of sexuality and fear in which is the beginnings of this holiday?  The attitude of acknowledging something that is, in many ways, opposed to His Commandments for His people is rebellion at it's most basic level.  How you might look at this day doesn't take away the origins (and true meaning) of it, but instead, masks our worldly ideas of 'love' rather than WHO true love is...our heavenly Father.

(1) Oxford Dictionary of Saints, s.v. "Valentine": "The Acts of both are unreliable, and the Bollandists assert that these two Valentines were in fact one and the same."
(2) Oruch, Jack B., "St. Valentine, Chaucer, and Spring in February", Speculum, 56 (1981): 534–65. Oruch's survey of the literature finds no association between Valentine and romance prior to Chaucer. He concludes that Chaucer is likely to be "the original myth maker in this instance."
(3) Meg Sullivan (February 1, 2001). "Henry Ansgar Kelly, Valentine's Day". UCLA Spotlight.
"Chaucer: The Parliament of Fowls"., wsu.edu
(4) Plutarch • Life of Caesar
(5) Faunus
(6) Ovid, Fasti: Lupercalia
(7) One of Plutarch's Roman Questions was "68. Why do the Luperci sacrifice a dog?" His best response was "Nearly all the Greeks used a dog as the sacrificial victim for ceremonies of purification; and some, at least, make use of it even to this day. They bring forth for Hecate puppies along with the other materials for purification."
(8) http://www.britannica.com/EBchecked/topic/351677/Lupercalia
(9) http://en.wikipedia.org/wiki/Lupercalia#cite_note-6
(10) Faunus
(11) Faunus
Site Map